Ladies off to Leamington!

At the Last 8 of the County Triples at Wilton BC on Saturday 11th June we had two teams in action. Both teams won their Quarter Final games in the morning – Sheila G with Bev L and Ellen S had a comfortable win but Sue O, Patricia and Rose M had a really close game against the 2015 winners which was poised at 17 all at 17 ends! With the Skips to bowl Devizes were in trouble but fortunately Sue drew the shot to finish the game with a win which took the team into the Semi Final.

In the afternoon Sheila, Bev and Ellen played a team from Box and were well down early in the game but they managed to reduce the deficit and fought hard to hold on but sadly lost out in the end.

Meanwhile Sue, Patricia and Rose were having a very close game against a triple from Amesbury with neither team managing to open up a gap in the scores until late in the game when the Devizes girls took a 4. Into the last end the Amesbury team needed 8 to draw but Devizes took 1 to finish 18-9 and take a place in the County Final at Supermarine BC on July 30th. They will also represent Bowls Wiltshire in the National Finals at Leamington in August. Congratulations to both of the Devizes Triples – a good day’s bowling! 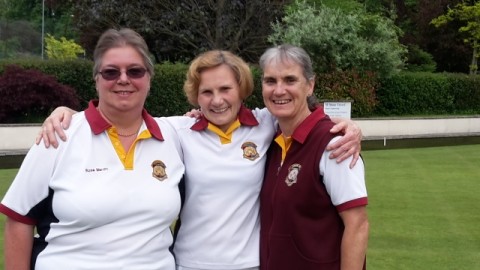