On Saturday we celebrated the opening of our greens with a drinks reception and buffet lunch with invited guests and seventy members. Following the lunch provided by Jenny, Mary & helpers, Howard Pryse, the Financial Director of Bowls England, gave an insight into the clubs history over the past 100 years with some interesting facts and amusing stories about some of our current and past members. Howard then gave an emotional eulogy to Sue and then invited Claire Perry MP to present the “Sue Ochyra Memorial Trophy” to Sue’s children Helen & Simon.

Claire  then spoke about some of the clubs qualities and the clubs involvement in the local community. She congratulated the club on reaching this milestone and wished the club good luck as it enter it’s second century.

Following the speeches Claire joined Harry to unfurl the club’s new Centenary flag before bowling the first bowls of the season with the clubs Captains Sheila & Dave using Sue’s bowls.

Guests and members then took over both greens for their first roll up of the season.

The picture below shows MP Claire Perry with the club’s Captains Sheila & Dave delivering the opening bowls. I am told Dave was the furthest from the jack!  I’m not sure who put the mat down either? 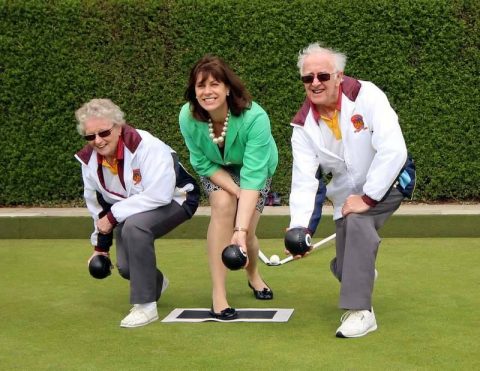 IT’S HERE. The Devizes Bowls Club Centenary season is starting soon and a lot of hard work and planning has gone into providing a full programme of events. There are many celebration games planned for the season in what is going to be a busy but memorable six months. It however, can only be memorable if you, the members, make it so. Please support your organisers and join in everything you can.

Yesterday, the 9th of November we said a sad farewell to Sue.  There were people from all over the county and from the Devizes Club at a packed West Wilts Crematorium where they heard Helen (Sue’s daughter) and Mandy (Sue’s sister) pay moving tributes to Sue giving a small insight into her life. Back at the Club Eleanor gave a glowing tribute on behalf of the Bowls Club highlighting how successful Sue had been during her short bowling career and making comment on how much work Sue had done for both the Club (her second home) and the County. Helen thanked the members of the club for not only hosting the wake, but also for being such good friends to her mother.

On a very sad day Sue’s family, the Devizes BC and the County ensured that Sue had a fitting send off.

Sue joined Devizes BC in 2002 and it soon became apparent that with her sporting background she would soon excel at bowls and this was soon proven when she won the Ladies Novice Cup in 2004.

In 2011 she won the Ladies 2 Wood, a cup she retained in 2012 and then in 2013 she achieved what no other lady had done before when she won all three of the Ladies major competitions the Rose Bowl, Handicap and the 2 Wood. In 2014 she won both the Rose Bowl and Handicap again to continue her remarkable run in club competitions.

By 2010 Sue had attained the necessary points to go onto the Ladies County Register and it was also in 2010 when she took on the role of Bowls Wiltshire Administrator and although she had little secretarial experience her “Can do Attitude” ensured she became, in Bowls England’s opinion, one of the best County Administrators in the Country.

In 2012 Sue made her first appearance for the BWL SWCL team and she also reached the semi-finals of the County Triples. This was followed in 2013 with her first appearance in the BWL Johns team. She continued to play in the Johns during 2014 and she was also selected for the Walker Cup Team. Sue finish 2014 by winning the BWL Champion of Champions at the County Finals in September at Devizes.

2015 saw Sue mount a strong challenge on the Ladies County Competitions when she reached the semi-finals of the Singles, Triples and Fours. She was also runner-up in the Ladies Over 55 Singles.

This year saw Sue achieved her dream when along with Rose & Patricia she represented the County at the BE National Finals at Royal Leamington Spa in the Triples and with Rose in the Pairs. On returning to the club she contested three of the Ladies competitions finals when not in the best of health but to her credit and fighting spirit she won the Rose Bowls for the fourth time, the cup she coveted so much.

Off the green Sue was involved in so much but most noticeable was her drive and determination to ensure that the Bowls Committee met the needs of the club bowlers and more recently her commitment and dedication to the Centenary Committee has in ensured that next years the club will have a celebration befitting the occasion.

Sue will be sorely missed by us all and she must never be forgotten for all she did for Bowlers at Devizes BC and in the County.

Devizes Triple of Rose M, Patricia R and Sue O, representing Bowls Wiltshire, enjoyed their first ever appearance at the National Finals at Royal Leamington Spa  when this morning they beat Nottinghamshire A 19 – 14 and then in this afternoons second round they defeated Lancashire B 18 – 17 to progress to the Last 16 tomorrow where they will meet Warwickshire B. Let’s hope for another successful day for Rose, Patricia & Sue tomorrow. 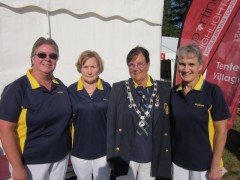 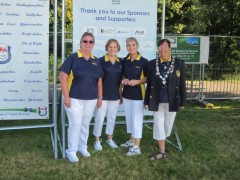 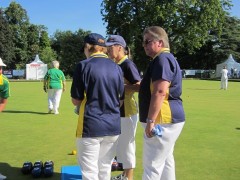 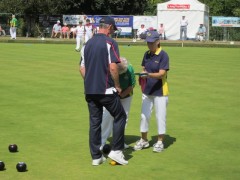 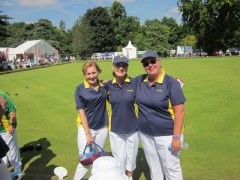 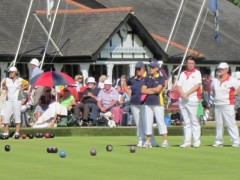 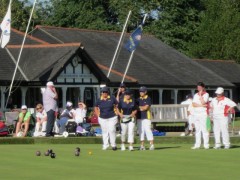