It all happened on Sunday 3 July 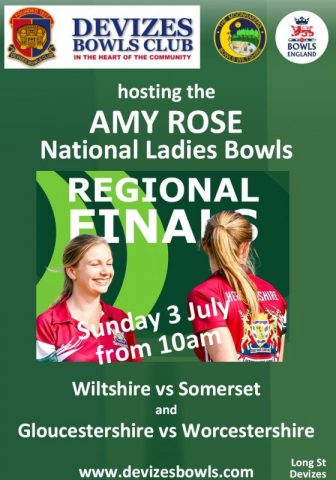 On Sunday the club had the honour of hosting the Bowls England Regional Final of the Amy Rose Competition.  The club was chosen from eighty five clubs applying to host one of the twenty four Regional Finals across the Country.  We welcomed teams from Gloucestershire, Somerset, Worcestershire and Wiltshire to the club to play the semi-final, with the winners going on to represent the Southwest at the National Finals at Leamington on the 27th August. The results were Somerset beat Wiltshire and Worcester defeated Gloucestershire and went on to win the Final against Somerset.

The Management Committee would like  to say a huge thank you  to all the members who gave up their time to make the  event a great success, we received so many comments such as fantastic venue, great greens.  Club members have certainly pulled out all the stops but I think we should look at the quote from the Bowls England representative  Edna Bessell MBE sent to Ali Cross:-

” I just wanted to say a big thank you to you and all your helpers at Devizes Bowls Club for making the above event a success.  Your members were so helpful, friendly and made us very welcome throughout the whole day which was much appreciated.  I must say your green was impeccable which is a credit to your greenkeeper.

Once again,  very many thanks for your hospitality and organization of the whole event”.

We should all be very proud to be a member of Devizes Bowls Club.