Here is the link to the latest official world Bowls Magazine

Please select the link at the end of this document to see the presidents A.G.M report that would have been read to you had the A.G.M been held.

Reports from the treasurer and secretary can be found in the AGM Minutes section of the members area. 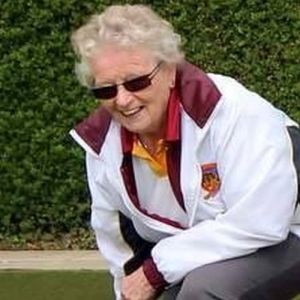 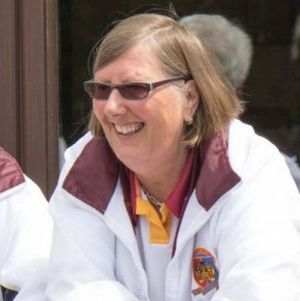 What a great year it is becoming for our lady bowlers with yet another success leading to another appearance at Royal Leamington Spa representing Wiltshire as champions in the Bowls England Senior Pairs competition.

The honour went to Sheila Garlick and Bev Lilley (pictured above)  who gained the title and the opportunity to compete with the best in the country at Leamington with an historic win over Wiltshire top bowlers and previous champions Alex Jacobs and Sue Cooke by 19 shots to 18 on their home patch at Box.

Well done ladies, Best wishes for the 4th August from all of us at Devizes Bowls Club. 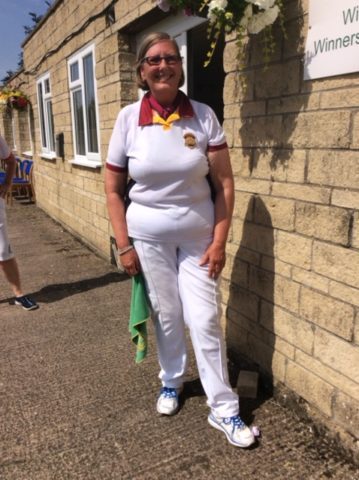 Many congratulations to the Ladies of Bowls Wiltshire Johns Trophy Team who, following a magnificent win over the highly rated Devon team, qualified for the national semi-finals to be held at Royal Leamington Spa on Saturday August 4th. We are very proud to say that the team includes our very own Ladies Captain Bev Lilley. Well done the ladies, well done Bev.

Should anyone wish to go and see them please refer to my email announcing that there is a coach organised by Bowls Wiltshire Ladies starting from Melksham.

On Wednesday 20th June 2018, a group of Devizes bowlers and visitors, went to London to plays bowls against the Chelsea Pensioners at the Royal Hospital, Chelsea.

We were given a very warm welcome, had an interesting but enjoyable game followed by an excellent tea in the Great Hall. The weather was perfect and a great day was had by all.

On the week-end of 11th, 12th and 13th May, a number of Devizes bowlers undertook a mini-tour to the south coast playing on Friday, Saturday and Sunday at Blandford Forum, Weymouth (Greenhill) and Swanage respectively whilst staying for two nights at the Royal Hotel on Weymouth sea front.
Bowling wise the tour had limited success with a record of two losses and one win. However, socially the tour was a resounding success with the weather improving each day, the hotel food and service exceptional and good company all week end with plenty of excellent banter both on and off the rinks.

At Blandford we suffered heavy losses on most rinks with Colin Littles rink achieving the least loss with a score of 17-19 his team being Jeff Whiting, Peter Diwell and Geoff Woollan.
At Greenhill we faired much better winning on three rinks and losing on three but gaining the overall aggregate win. Top rink was Michael Alexander, Rachel Whiting, Simon Northway and Dave Greenwood with a great score of 34-14.
Sunday on the tricky rinks at Swanage we lost on five rinks and won on just the one captained by Steve Mulligan and a team of Pat Cartwright, Richard Bradfield and Angela Roberts who registered a score of 23-16.

There was another success indicating that Devizes bowlers as well as being good on the greens are also knowledgeable as the team were successful in winning the hotels Saturday night quiz organised in the bar.

Special thanks were recorded to those who organised the events and also to Geoff Woollan and Terry Miles who did day trips, Geoff to Blandford Forum and Terry to Swanage, to help make up the numbers where we were short of players. 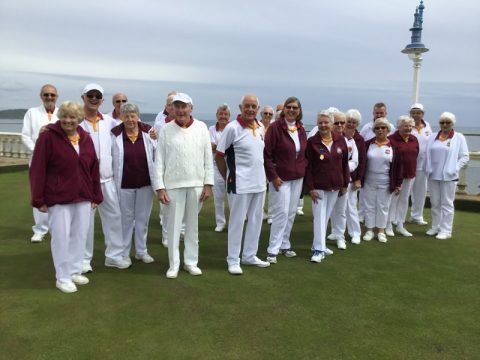 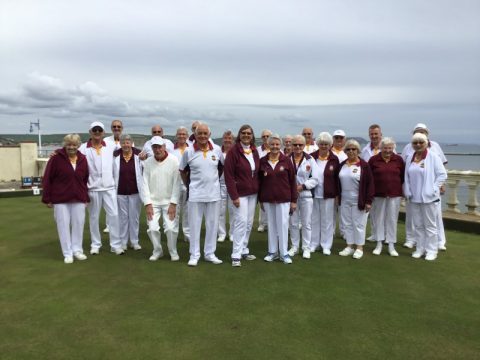 Sunday 27th August saw the next “Big Game” of our continuing centenary celebrations when we welcomed a mixed team from Bowls Wiltshire. Guests were welcomed on arrival by the club President, Captains and Vice-captains and this concept of meet and greet has been warmly received by all our visitors.

The game, originally set for 6 Rinks became so popular with the Bowls Wiltshire players that in the end we played over 10 rinks instead. The game was extremely competitive but in a friendly manner, however with the strength of our team drawn from those who signed up to play being somewhat weaker than a group of 40 of Wiltshire’s finest the final result was inevitable and almost
un-publishable.

At the after match socialising, a good meal and a few drinks were enjoyed by all, followed by speeches from our Captains and the Bowls Wiltshire lady Chair and Captain for the day June Corbett. After all the usual list of thanks BW captain proceeded to bring about a series of comical episodes by raising funds for the Air Ambulance by way of individual fines of £1.00 for the craziest of reasons like incorrect actions on the greens, arriving in the wrong coloured shirt, trying to pinch her donations basket when clearing the tables after the meal ect.

Below is an extract from June Corbets report on the Bowls Wiltshire Website.

“A Bowls Wiltshire mixed team of 10 rinks travelled to Devizes on 27th August for a match as part of the Devizes Centenary celebrations. It was a lovely hot sunny day, the bowling was good and the banter between the two teams helped to make the occasion special.
A much appreciated cooked meal was provided. Presentations were made and both Captains made the point that the result was not so important but more for the participation and enjoyment experienced by all, (however for those who like to know BW did win).
As usual fines were imposed and a very generous £80.13 was raised for the Wiltshire Air Ambulance. BW Chair June thanked everyone for their support throughout the year. As a final note all monies collected from the four 2017 BW Mixed games raised a very creditable £217.80 which has been forwarded on to the Wiltshire Air Ambulance Charity Appeal.”

On Sunday 13th August Devizes Bowls Club celebrated its centenary with a gala day that was planned to involve twelve clubs from around the county who sent one rink of mixed players to compete against us and help with our celebrations.

Teams from Chippenham Park, Wilton, Trowbridge Police, Swindon North End, Trowbridge Westbourne, Chippenham Park, Chippenham Town, North Wilts Chippenham, Salisbury, Avon and Spencer Melksham were in attendance but unfortunately Pewsey and Amesbury had to withdraw at the last minute.
The weather was kind to us, the atmosphere was competitive but very friendly and a great day was had by all.

The afternoon ended with another great feast, a few drinks and a grand raffle and the comments received by President Rosemary and Captains Dave and Sheila as they said goodbye to everyone as they left were all very positive everyone thanked the club for their invitation.

Wednesday 9th August saw the annual trophy match between Devizes and Pewsey Vale named after a gentleman who was prominent in both clubs many years ago and competed in his name, “The Robin Hendry Memorial Challenge Match”. This event is held alternative at Devizes and Pewsey and this year we travelled to Pewsey’s home territory.
The game over six rinks and 21 ends was played in generous and friendly way but nevertheless with the usual competitive edge as each team fought to have the honour of their name on the cup.
At first home advantage played a major part in the way the game was playing out with Devizes only winning on two of the six rinks at the half way mark with two rinks well behind. As often happens though it became a game of two half and Devizes started to claw back the deficit eventually winning on three and loosing on three. This being the case the result all boiled down to the aggregate score and when the result was announced if was Devizes 113 and Pewsey Vale 106 so the trophy was retained by just six shots.
Top rink for Devizes also followed the trend of a close fight with two rinks being of equal shot difference therefor requiring a countback of ends won. The count resulted in a difference of just 1 win and the honour went to Henry Crate, Monty Smith, Wendy Gaisford and Sheila Garlick.