The Social Committee are arranging a pre Christmas get together in the form of a Mince Pie and Mulled Wine evening,

The Bar will be open and there will be background Seasonal music playing – all designed to get you into the spirit of Christmas.

No need to book, just come along and enjoy this very traditional event.  It will warm the cockles of your heart!

Christmas Raffle tickets will go on sale before the Christmas Meal.  They will be available at Short Mat bowling sessions on Mondays and Wednesdays and Saturday Coffee mornings from this Saturday.

There is still time to put your name down for the Christmas Meal.  The list is on the table at the Club and will not be removed until 30th November.

So please if you haven’t already put your name down, do it now before it’s too late and come along and enjoy what promises to be a very enjoyable and social event.

Latest minutes of the Management Committee, Bowls Committee, Social Sub-committee and the Annual Bowls Meeting can now be found under the appropriate heading in the Members Area. Please note that as there is no current heading for the social Sub-Committee their minutes can be found in the Management minutes section.

As the end of the 2021 season has been reached we should congratulate both committees on surviving what has been a horrendous two years. However, hopefully, we can look forward to a full season next year.

During 2021 the use of the website has improved a little but there is still much we can do with your help. Although the number of reports from team leaders has been a little better than last year there is still room for a vast improvement.

The home made rink booking system worked very well last year after a few teething problems, but, there were some anomalies caused by erroneous bookings which will be eroded next year as we introduce a professional rink booking package for you to use.

During the next few months we will also be looking at rejuvenation the website and for those who are interesting in this type of function if you visit the website for Highworth or Calne bowls clubs you will see the type of format we aiming for.

I would like to ask ALL team leaders to communicate results and submit reports throughout the season or if they cannot do this themselves please nominate a team member who is willing to do so.

Remember its your site! and it can only be a good as the information provided.

The annual bowls meeting took place at the club on the morning of 6th November starting at 10.30 am.

Acting Chairman of the bowls committee Chris Holt opened the meeting with a request for a minute’s silence for those we had lost over the past two years. Those named were Marion Butcher, Roy Chumbley, Bill Lee, Norman Miles, Maurice Ottridge, Peter Romijn, Monty Smith, Ingrid Thorogood and Joyce Weston.

Chairman continued with the meeting and announced that there were 57 members in attendance and 13 apologies. There were no minutes from a 2020 ABM due to covid restrictions no meeting took place.

The captain’s then, in turn, gave their reports with a heartfelt one from Sue including high praise and thanks to her Vice-Captain Ali Cross and very grateful thanks to the members for the remarkable fundraising that went on to raise such a large sum of money for the captain’s charity, the MS Society.

Simon however, as men’s Captain, did a Simon and kept his report short and sweet. He reported on the successes of the men’s leagues, joining Sue in thanks for the money raised and wishing the new Captain’s the very best of luck for the 2022 season.

Both Captains then handed over their Captain’s badges to their successors Tom Mullins and Ali Cross. They announced the names of their Vice-Captains Mike Mitcham and Julie Romijn. The new Captains then voiced their hopes for 2022 and named their charity as moto neuron. Ladies Captain also appealed for more people to sign up for club friendlies saying in her view,  it should not be necessary for the Captains to be chasing around to hunt for extra players when the were so many registered players in the club. Men’s Captain appealed for support for the Friday night club nights.

Bev Lilley gave a short presentation with illustrations of the proposed new club shirt and a county shirt was also circulated to show the type of material that would be used. A vote was taken to see the feeling of the meeting regarding having a new shirt and 31 were in favour with 5 against leaving 21 un-decided.

Chairman then announced the bowls committee’s nomination for the most improved player of the year (The Ricky Stinton Award) and this was Steve Brooks.

The President closed the meeting wishing everyone a safe winter and the best of luck in everything for 2022.

ITS THAT TIME OF YEAR AGAIN

The social committee have completed their arrangements for this years Christmas lunch.

Due to Covid restrictions places are limited compared with normal for this event so book early.

Click the link below for full details of arrangements, date, time , menu and costings.

Dave G on behalf of the social committee. 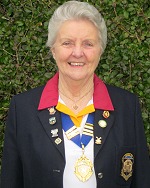 Message from our President

With the Government’s Roadmap staying on course, it looks incredibly positive that we will be able to start bowling soon. Although there are still restrictions in place for the early part of the season by the end of June we will hopefully back to normal, with no restrictions.  I know that all the committees will be working hard to ensure that when we are able to bowl the club will be ready to welcome you onto the green. With the restrictions we currently have we may not be able to bowl against other clubs until restrictions are lifted so the Bowls Committee has prepared an exciting alternative program of bowling to suit members of all abilities and so ensure we are able to play the game which we all love.

In the meantime, stay safe and I look forward to meeting you all in the coming weeks.